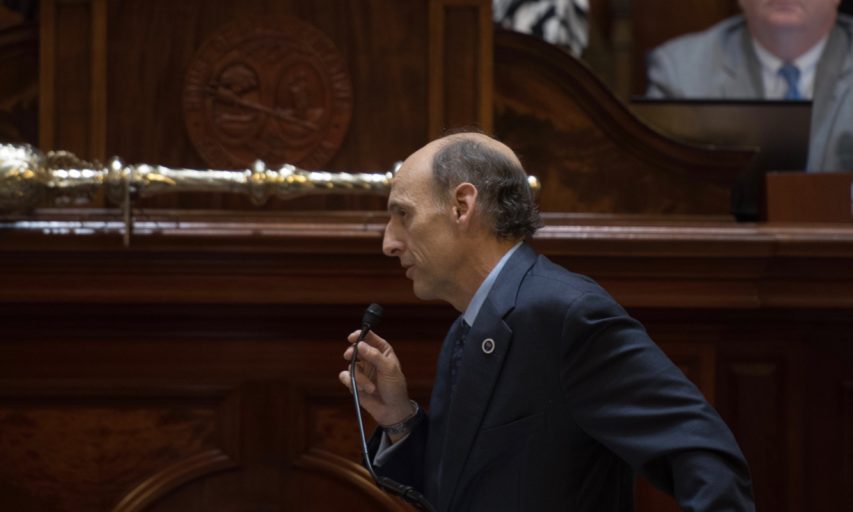 As a native of Northern Greenville County, I grew up in the Blue Ridge community. I attended Skyland Elementary School until the 6th grade, when my parents decided to send me to Southside Christian School in Greenville.

After graduating high school, I earned an accounting degree from Bob Jones University and entered graduate school at Clemson to pursue an MA in English. While at Clemson, I was hired by one of the largest pension actuarial firms in South Carolina.

I also believe that citizens should give something back to the communities who support them. Before being elected to the General Assembly in 2008, I served as a Trustee at Coastal Carolina University. Elected to the Board in 2006, I served as Board Secretary and chairman of the Audit Committee. Currently, I serve on the board of the University Center of Greenville.

My political conservatism derives from my belief that government was created to protect the “life, liberty and property” of each of us. Government was not created to redistribute wealth or give us benefits from cradle to grave but to provide us with a stable society that encourages opportunity and individual prosperity.

Modern political conservatism has a long history dating back to Edmund Burke, the British political philosopher and Member of Parliament who supported the American colonists tax protests. He believed in the individual’s right of property ownership and the societal stability that developed with it. He witnessed it in the American colonies where private property ownership elevated ordinary people into citizens who had a stake in building a stable society in which to prosper.

Burke was a traditionalist. He once said, “People will not look forward to posterity, who never look backward to their ancestors.” He was a conservative incrementalist. Living during the time of the French Revolution, he was horrified at the carnage caused by radical political change and believed that small political reforms accomplished more and harmed less in the long run.

John Locke, the Scottish political philosopher who drafted the first colonial constitution of the Carolinas went further and said that the role of government was to protect our “life, liberty and property.” Both men strongly supported freedom of speech and broad religious tolerance.

Thomas Jefferson, under the influence of Burke, Locke and other Enlightenment thinkers, wrote America’s foundational statement of liberty, “We hold these truths to be self-evident, that all men are created equal, that they are endowed by their Creator with certain unalienable Rights, that among these are Life, Liberty and the pursuit of Happiness.”

In these words and those that followed in our Declaration of Independence and Constitution, Jefferson created a uniquely American worldview that represented the truths derived or reaffirmed during the Age of Enlightenment.

These are not dead words from a faded past as some on the new post-truth Left would have us believe. They are anti-traditionalists who give credence to the peddlers of fake news and deniers of historical fact. It is best to remember where we came from.

Beyond my voting record supporting life, I have required audits of our state agencies that oversee abortion clinics to ensure that these agencies are following state law. I am a member of the House Legislative Oversight Committee that reviewed these audits and South Carolina’s relationship with Planned Parenthood. The audits revealed various problems that needed correction. The corrections were made and the agencies in question remain under the Committee’s oversight. Reducing the number of abortions in South Carolina can be directly attributed to Burke’s strategy of small incremental reforms.

As a member of the House Legislative Oversight Committee, I have recently called for an audit of the Judicial Merit Selection Commission (JMSC) as part of my attempts to bring transparency to the procedure that we use to select our state judges.

I believe in individual liberty. I strongly support our right to speak our opinions openly, to assemble and protest peaceably, and to practice religion however we may wish. I have voted consistently to protect our 2nd Amendment right to arm ourselves as we see fit. I believe that the 2nd Amendment is the Constitutional guarantor of the 1st Amendment and the first line defender of our individual life and property.

I believe that citizens deserve a small limited efficient government in exchange for the taxes that are demanded of them. As a member of the House Legislative Oversight Committee, we examine the spending habits of state agencies. Our audits have found waste and inefficiencies and we have started the reform of these agencies as needed.

I spent a good part of the last decade introducing tax reform bills to eliminate sales tax loopholes, flatten income tax rates, and lower property tax rates. Since our state tax laws are tied to federal tax laws, tax reform can be difficult to achieve. South Carolina’s working middle class bears the brunt of tax payments to state government. They received a much needed income tax break from Congress this year. Our Republican controlled General Assembly must ensure that the federal income tax break continues to flow through to our workers on the state level in the years to come. I will actively participate in that oversight.

I have consistently supported the parents right to decide how to educate their children. As a member of the House Education and Public Works Committee, I have supported school choice legislation, voted to expand charter schools and pushed for increased opportunities for home-schooling children. At the same time, I have not ignored our public school system. I have voted for overdue reforms in our educational processes, accountability and financial administration of school districts.

Conservatism in politics goes far beyond a few votes cast. Conservatism requires, as William F. Buckley, Jr. observed, the courage to act as “someone who stands athwart history, yelling Stop, at a time when no one is inclined to do so, or to have much patience with those who so urge it.”

Stop does not mean to refuse to find a workable compromise to get past a viable political problem. Stop means slowing down the legislative process so that citizens and their representatives fully understand what the legislation contains. In other words, conservatives yell Stop then asks how much will it cost, who benefits from it and why.

Most importantly, conservatives ask if the law is needed at all. Most times, the answer is no.